Recently LG has introduced two sizes of OLED (AMOLED) TVs that were also both shown at CES 2011. Both have incredibly sharp definition. While on display at CES the 15" sizes showed animated 3D movies and the 31" OLED TV showed HD 3D videos with natural scenes. The picture on both was crisp, colorful and wonderful from the super high resolution OLED panels.

The OLED TVs from LG are razor thin at only 2.9mm in depth. However, all of the video boards and circuitry are housed in the stand, so without the stand the TV would not operate. The accompanying stand supposedly revolves to allow for wall mounting but of course that would add depth to the "worlds thinnest TV." Other .8" depth edge lit LED TVs for instance have all the video board compenents included inside the panel for plug and play operation. The LG OLED TVs are also plug and play but inputs were not disclosed on the 31" OLED which is a prototype and not currently shipping. I have to say the picture was stunning even though it was not a glasses free 3D TV. Instead the user has to view these OLED TVs with rather bulky active shutter 3D glasses (to see 3D). 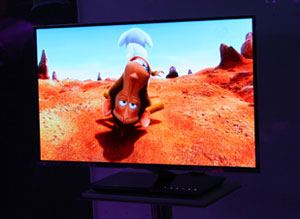 LG makes the statement that these OLED TVs are 3D crosstalk free which I agree with especially on the 31" OLED TV displayed. I noted just a little in the 15" models.

The two dimensional images from these OLED TVs is also incredible - giving more depth and contrast while adding so much more resolution.

LG is quick to recognize the excellent viewing angle of these OLED TVs. Yes, they are perfect. You can stand to the side and see full contrast in the on screen images. But this has been an attribute of plasma TVs for 10 years so it's really nothing new. I will say that the contrast, and brightness of the OLED TVs is better than plasma. The brightness is equivalent to LED TVs but more consentrated. 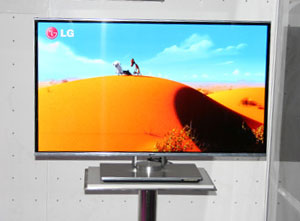 The 15" OLED TV is supposedly available according to representatives from LG. The model has shipped apparently to Europe and is the LG 15EL9500. It has a stout price tag of around $2700 and the contrast ratio is listed as 10M:1 rather than the Infinite contrast ratio we have seen posted by LG recently. Depth is 3mm and the response time is frightenigly fast at .001 - making it much faster than the best LED TVs.